Men are wretched at dealing with rejection.

Women are not good at it either. But at least they are more prone to talking about it, or they are vulnerable enough to be sad. Men tend to go silent or get angry.

I want to get to sexual rejection—wives who seem to reject their husband’s sexual advances—but first, a warm-up illustration.

For the first five to ten years of our marriage, Sheri and I would have our most intense conflict when we went to visit her parents. The conflict always circled around my sense of being rejected. Sheri has five siblings, and when we visited her parents there were always a few siblings and their families there too. Having not seen them in a year, she (and I) were eager to spend time with them. But at some point I would feel like she wanted to spend more time with them than with me. This might have been true given how infrequently she saw her brothers and sisters, but, all the same, I took it personally.

My reactions were juvenile. It was as if I was looking for her to pat me on the head and say, “Oh, Eddie, don’t be silly. I love you more than anyone. I will cancel all of my family plans for tomorrow and spend it only with you.” Or, better yet, “Are you kidding?! I am married to the world’s supreme stud-muffin. I adore you . . .”

I am thankful that the Spirit is very powerful and now my responses rarely look that pitiful. Being able to say: “I miss not being able to speak to you during the day. Let’s try to take a walk this afternoon,” is the fruit of massive sanctification.

Now to a more difficult experience of rejection.

I have spoken to a number of men who have a sense that sexual interest in marriage should be roughly equivalent—that both husband and wife should have similar sexual desire for the other person. Men are usually willing to accept that they might have a little more sexual desire than their wives, but when those differences get extreme, watch out. Men will feel rejected.

“Why can’t you ever take the initiative and ask if I want to have sex?” I know many husbands have said this to their wives and I suspect many more think it.

Women can certainly feel like sexual objects, and that is an important matter, but, for a moment, consider the rejected man.

A husband is in a very vulnerable spot every time he asks his wife if they can be sexually intimate. Perceived resistance will be taken as rejection. Maybe the wife really does have a headache, or perhaps she is just bone tired, but it will be hard for the husband to resist the urge to take it personally.

“No” to a husband’s advances is a big deal in a marriage. A godly wife can certainly say “no” but she will also be alert to the way her response might be taken by her husband. Understanding and compassion can go a long way at these moments.

Men, if you react with silence or anger, it means you have a problem. Any time you think, “I have a God-given right to sex from my wife” expect to crash and burn. Aim, instead, for massive sanctification that might say, “Could we talk about when I ask you if we could be intimate [and I am not asking right now]? I am surprised that those are really difficult moments for me. I know that sometimes the timing is bad, but I tend to take “no” or even “later” as rejection, and I don’t want to do that.”

Those conversations can be hazardous, especially if a wife uses it as an opportunity to talk about how she feels like a body more than a person to her husband. But when a desire to love the other person and pursue unity in the relationship outweighs a sense of personal rights, couples can usually come to creative solutions. 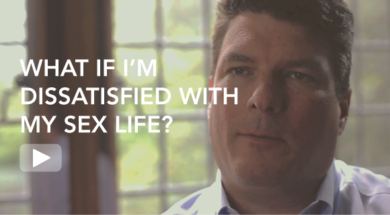 Dissatisfied with My Sex Life